The Geologist Joseph William Winthrop Spencer came from United Empire Loyalist stock and had family connections in the United States. His father died shortly after Spencers birth in 1851 and in 1867 Spencer and his mother moved to Hamilton.

Following his early schooling he worked as an assistant to a pharmacist and developed his interest in geology through the Hamilton Association of amateur geologists. In 1871 Spencer went to McGill University and graduated in 1874 with a first class honours degree in Applied Science.

While at McGill he was a student of the first Canadian geologist with a worldwide reputation, Sir J. William Dawson. Through the 1870s Spencer worked for a summer with the fledging Geological Survey of Canada, as an assistant to a surveyor in the Upper Michigan copper mines, and as a science teacher back in Hamilton.

His Michigan work must have stimulated his intellectual curiosity and in 1877 he pursued his doctorate at Germanys Gottingen University. At the time Spencer was only the second Canadian to ever earn a doctorate in geology.

Through the 1880s Spencer pursued a varied academic career at universities In Nova Scotia, Missouri and the State University in Athens, Georgia. It was while here that he began a geological survey of the north western part of that state.

His tenure here came to an end over political differences when his preference for science and stratigraphy over business interests, specifically gold mining, became apparent. So, in 1894, Spencer moved to Washington DC where he set up as an independent consulting geologist.

In 1896 he had married Kate Sinclair Thomson of Toronto. He continued as a consultant geologist until retirement in 1920 when he returned to Canada. He died soon thereafter in Toronto on October 9th, 1921 and is buried in the family grave in Dundas.

Spencer was a prolific and well respected geologist publishing many scientific papers. He is particularly noted for his early work on pre-glacial rivers in the Great Lakes basins and pro-glacial lakes which were the forerunners of the present-day Great Lakes.

These bodies of work made him the ideal candidate to be commissioned by the Geological Survey of Canada to produce a report on the Geology and Physics of Niagara Falls, published as The Falls of Niagarain 1907.

In addition to the typical observational mapping techniques of the day, he was an expert on mapping ancient beaches and strand plains that marked the previous levels occupied by the Great Lakes.

Spencer embraced the data derived from the great engineering works at the Falls. Soundings were taken throughout the gorge, even under Niagara Falls themselves, and in the Whirlpool; drill holes were made to determine the character of buried channel beds; ancient river beds and stratigraphy were surveyed and these data combined with records , both recent and within the sedimentary record, of the changes in lake levels. 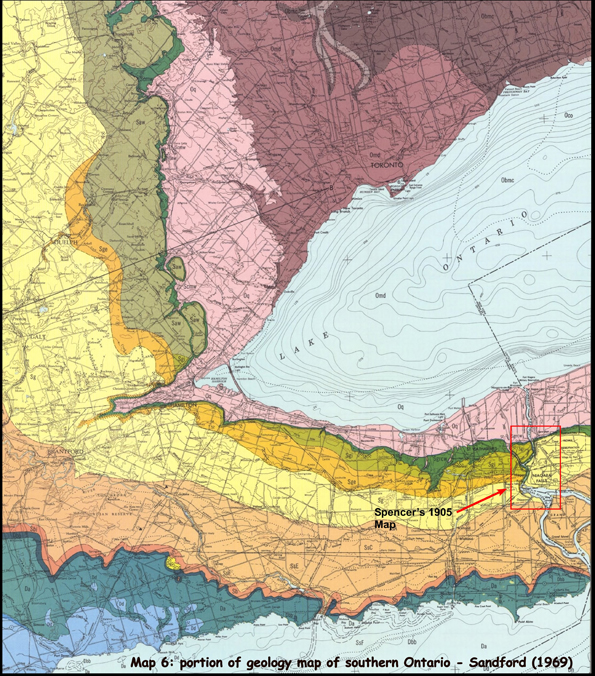 click on map to see some of Spencer’s geological fieldwork